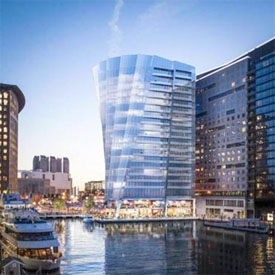 Sails are coming to the Seaport are of Boston, if developer Jon Cronin has his way with the BRA.

The 250-foot-tall building, designed by architect Howard Elkus, would feature a twisting, angular design out toward the World Trade Center and Boston Harbor. It was inspired, in part, by the city’s recent push for bolder design in the booming Seaport, Cronin said, which has prompted other developers to move beyond the boxy looks that characterized many of the neighborhood’s earlier projects.

“We had already designed a striking yet cost-efficient tower until I attended Mayor [Martin] Walsh’s speech last December urging developers to build more architecturally significant buildings,” said Cronin in a statement. “We decided to meet that challenge.”