The proposed plans for the Flower Exchange have been released by the Abby Group. 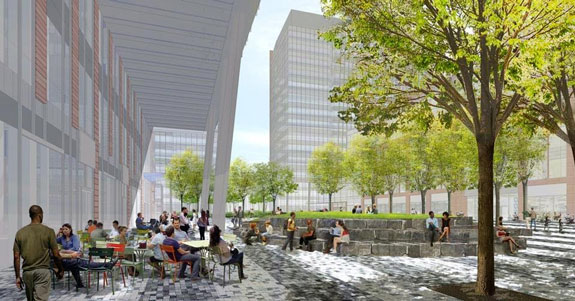 Plans for the former Flower Exchange, centered on a 1-acre public plaza are cited in a recent Boston Globe article, noting “Abbey is targeting companies that want to be near Boston Medical Center and Boston University Medical School. The cluster of four buildings of lab or tech office space would total some 1.6 million square feet, rising 200 feet or more near the Southeast Expressway. Offices would have large open floor plans, while restaurants and stores would go at street level, as well as a cultural center and plaza Abbey has dubbed ‘Albany Green’.”

The article also includes a quote from Bill Keravuori, a managing partner at Abbey, defining the vision for the project as “a sort of European plaza…[which would] extend public space across the entire ground floor of the project.”