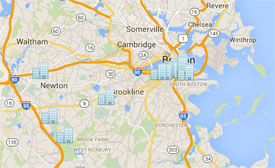 As Boston marches through a gilded real estate cycle as insatiable growth spills out of Cambridge into submarkets not traditionally known as tech or life science destinations, we take a moment to pause and survey the evolving office landscape.  Given the strength of the regional economic growth, the compilation of markets including Boston, its inner core and Cambridge have seen the Class A office sector achieve a vacancy rate of 8.0% in the 4Q15 which is an improvement over the prior cycle’s low of 8.3% set in Q108.  The current success of the market is underpinned by positive absorption being posted in 18 of the last 19 quarters.  Not surprisingly, the same asset class has effectively reached the high water rent benchmark of $56.42 PSF set at the peak of the last cycle when the Q415 closed with Class A office rents averaging $56.39 PSF.

While the capital markets sector has been on fire given the health and view of Boston as one of the safest markets for investment, the fundamentals have pushed the development community to enter the discussion in a rather pronounced way.  In 2012, all of the 2.1M SF of product under construction was preleased.  In the 12 month period closing at the end of 2015, only 64% of the 3.2M SF of product under construction had commitments.  This telling stat indicates that developers and their capital partners are underwriting significantly more risk as spec office buildings begin to enter the market but with the belief that tight supply will drive rents through the asset’s absorption period.

Taking a deeper look at recent pure spec office deliveries, which include Samuels & Associates’ Van Ness project at 1325 Boylston Street (237,935 SF), FRIT’s delivery of 450 Artisan Way at Assembly Row (99,000 SF) and the first of Skanska’s office deliveries at 101 Seaport Avenue (440,000 SF), lease up velocity has been impressive.  Within nine months of delivery, Samuels is almost 72% leased with the recent news of UnitedHealth Group’s lease of 125,000 SF.  Skanska is 81% leased with PwC taking 232,938 SF as the anchor tenant and FRIT is100% leased since delivering in 2014.  With CoStar showing another 15 projects under construction totaling 2.32M SF with leasing commitments of 56.9%, it is clear that the spec development cycle is ratcheting up in Boston and its surrounding core submarkets.

Additionally there are several large sites that are toeing the line and potentially adding further office inventory to the market including DIVCO’s Northpoint site which has 2M SF in the pipeline, FRIT who sits on 1.6M SF of inventory at Assembly Row, HYM Group with 1M SF at the redevelopment of The Government Center Garage, Boston Properties Hub on Causeway with 700K SF and New Balance which has another 430K SF in Allston to name a few high profile projects.  The question on the mind of the real estate community is how long this upcycle will last and which of these projects will be able to survive an inevitable down turn.