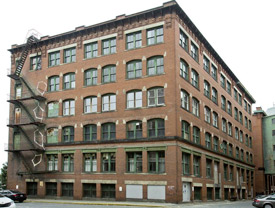 The GE campus in Boston’s Seaport has taken its first step in the construction process with the city issuing building permits to asbestos abatement.

From the Boston Business Journal:

Brian M. Campbell on Dec. 22 received a $258,000 building permit for the buildings at 5 and 6 Necco Court. Work will include asbestos and lead abatement in the properties, as well as selective interior demolition to access the surfaces impacted by those materials, the building permit states.

The two five-story Necco buildings date to the early 1900s and are former factories for New England Confectionary Co., which made NECCO wafers. Together, the buildings span 110,000 square feet. GE plans to rehabilitate the brick-and-beam buildings into 95,400 square feet of gross floor area…The campus will also include a newly built 12-story office, which includes a solar veil and an illuminated GE logo. The three buildings together will span 388,070 square feet and include 61,490 square feet of outdoor public space.