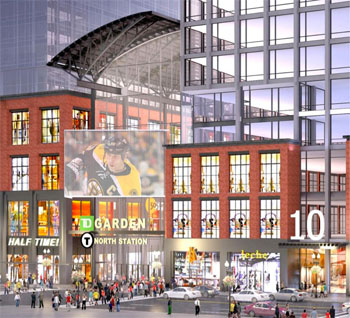 North Station’s first new tower is set to break grown.  This will add 688,550 rentable square of office and retail.

“The first leg of the 1.9-million-square-foot North Station tower complex, one of Boston’s biggest mixed-use developments, is set to begin construction.
AvalonBay Communities will break ground Oct. 27 on Avalon North Station, a 38-story apartment tower located between the TD Garden and Nashua Street. The project was approved by city regulators in 2013. Plans call for 497 apartments in a 636,550-square-foot structure…The complex also will contain a 306-room hotel, 668,000 square feet of office space, restaurants and retail space including a supermarket. Developers received a $7.8-million, 15-year tax break from the administration of former Boston Mayor Thomas Menino.”