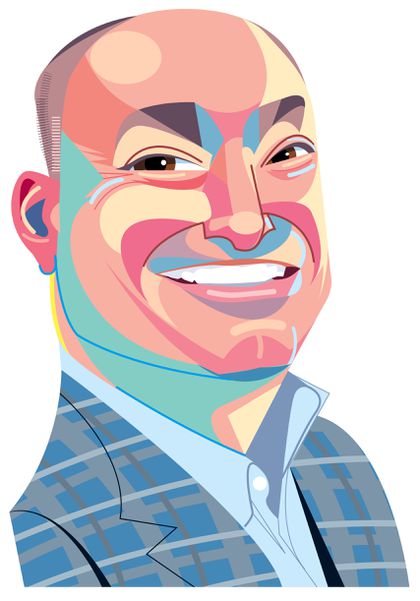 PTC just celebrated its first year in Boston, and its offices are a far cry from the old digs in Needham. About 1,200 PTC employees work on floors 11-17 in the top half of an oval-shaped office building with floor-to-ceiling windows. Like his employees, Heppelmann doesn’t have a personal office. Technically, he doesn’t even have an assigned desk. PTC now uses an increasingly common approach known as “hoteling” at its headquarters to save on space and spur more collaboration. Workers pick their desk when they arrive in the morning. Perhaps not surprisingly, people tend to gravitate to the desks they use frequently.

The move to 121 Seaport Boulevard helped accelerate Heppelmann’s efforts to transform PTC’s culture. It’s become much easier to attract younger workers. Employees now have more than 50 restaurants within walking distance. In Needham, they only had one — and it was in a hotel.

“We were kind of out in the wilderness,” Heppelmann said. “Now, we’re in the middle of things.”

To afford city prices, Heppelmann dialed back the square footage to 250,000 from more than 300,000. . He also traded the old structure for an open-office environment. “It’s completely changed the vibe,” he said.

The move is part of a broader transformation that Heppelmann has been undertaking since becoming chief executive in 2010. A high-flying stock in the 1990s that subsequently cratered amid the dot-com bust, the company was once best known for its computer-aided design software. Its shares have risen significantly since Heppelmann took over, and the company now has a market value of about $10 billion. The CAD software business is now called Creo and Heppelmann has expanded the company into connected devices (ThingWorx) and augmented reality (Vuforia). He expects sales of ThingWorx to exceed Creo this year for the first time.

The most important shift, though, has been to move to a subscription model (aka software-as-a-service). PTC’s $470 million acquisition of Cambridge’s Onshape last year helped accelerate that change.

Heppelmann wants to see more innovation in the Innovation District, the name former mayor Thomas M. Menino started using for the South Boston Waterfront to attract software firms and a startup culture. Lately, it has become more of an extension of the Financial District, with law firms and other corporate types, amid soaring rents.

Heppelmann is still hoping to see more tech companies join PTC there. So, it seems, does Mayor Martin J. Walsh, who visited the company around the time of its one-year anniversary in Boston. “He said, ‘We were so happy to hear that a technology company was coming to the building,” Heppelmann said.

ROTHSTEIN NAMED AN EXECUTIVE AT CERES

Steve Rothstein is on the move again.

Last week, he joined Ceres, the Boston sustainability nonprofit, as the inaugural managing director of the Ceres Accelerator for Sustainable Capital Markets. It’s not a business accelerator in the traditional sense of incubating startups. Rather, Rothstein’s job entails what he calls pushing for “system change” to tackle the climate crisis.

“Overall, we’re not going fast enough,” Rothstein said. “We need to make dramatic changes to get to carbon neutral. We have to accelerate how we’re thinking about it.”

For Ceres, it’s a new approach to sustainability; the nonprofit has worked for the past three decades to help individual companies and investors shape policies and practices.

Rothstein, for example, is currently working with federal regulators, such as the Federal Reserve and the Federal Deposit Insurance Corp., on how the banking and insurance sectors can become more environmentally sustainable.

Why would it matter to them? Studies indicate that the climate crisis could cost the United States up to 10.5 percent of its gross domestic product by 2100. Cutting greenhouse gas emissions sharply and achieving net-zero goals will require aggressive action.

In many ways, the move to Ceres is a return to Rothstein’s roots. He stepped down in December as the executive director of the John F. Kennedy Library Foundation, and before that, he served as president of the Perkins School for the Blind. But he spent the early part of his career working on the environment and renewable energy as president of Environmental Futures and as cofounder of Citizens Energy Corp. with Joseph P. Kennedy II.

HABITAT CEO AIMS TO HASTEN THE PACE OF BUILDING

Building affordable housing in the Boston area is no easy task, especially considering the high prices for even the smallest pieces of land.

But Jim Kostaras, the new president and chief executive of Habitat for Humanity Greater Boston, wants to step up the pace. Kostaras recently took over for Lark Palermo, who ran the local Habitat for Humanity chapter for 14 years. During that time, they built homes for 49 families. (Habitat requires future residents to put in at least 300 hours of “sweat equity” in the construction of their homes.)

Here’s one way to accelerate the process: Kostaras is considering partnering with residential developers so Habitat can build the affordable component of their housing projects. That way, the developers take care of the land acquisition.

Kostaras, an urban planner and licensed architect, joined Habitat from the Institute for International Urban Development in Cambridge, where he was a senior fellow who helped local governments around the world address urban poverty and other issues. He previously held key planning roles for the cities of Somerville and Boston.

After several weeks on the job, Kostaras thinks the best part might be his 25-person staff.

“They are all highly committed,” Kostaras said. “I don’t doubt for a minute that most of them, in this job market, could be working somewhere else for more money but they’ve made a huge commitment to our mission.”

Even General Electric retirees are feeling the pinch at GE these days.

Among GE’s budget cuts, the Boston company has decided to end its matching gifts program for retirees as of April 16. That means GE retirees now have two deadlines on April 15: It’s the tax-filing deadline, and it’s the last day for them to secure a corporate match for their qualified donations. The matching program will continue for current employees.

A company spokesman couldn’t provide a breakdown of how much money this could save. The GE Foundation gave $59 million in grants in 2018, including $30 million in matching gifts.

In a Jan. 31 letter to retirees, foundation president Linda Boff attributes the change to “tough decisions” to improve GE’s financial position. She said the shift reflects the foundation’s more focused strategy on STEM education, work force diversity, and improving health care access as the company pares back its contributions to the foundation.

“This decision was made after careful consideration of balancing GE’s community support with our work to return the Company to a position of strength,” Boff wrote. “I understand that knowledge doesn’t make this news easier to absorb from a personal standpoint.”

Most larger law firms in Boston are clustered in the Financial and Seaport districts, within walking distance to courthouses and the State House.

Global law firm McDermott Will & Emery is breaking ranks — and heading to the skies.

The firm just opened its new Boston office near the top of 200 Clarendon (aka the John Hancock tower) after moving from 28 State St. next to City Hall. More than 100 people made the move, including 70 lawyers. The firm leased 57,500 square feet on floors 57 and 58 in the Boston Properties-owned tower, compared to 70,500 square feet on State Street.

It might be further from the courts but Tony Bongiorno, managing partner of the Boston office, stressed its proximity to McDermott clients as well as the Mass. Pike and restaurants, gyms, galleries, and shops in the Back Bay. And those million-dollar views aren’t bad, either.