The Seaport snarl of traffic is about to get some trialed relief.  The bypass road will be opened to general traffic for a six-month trial. 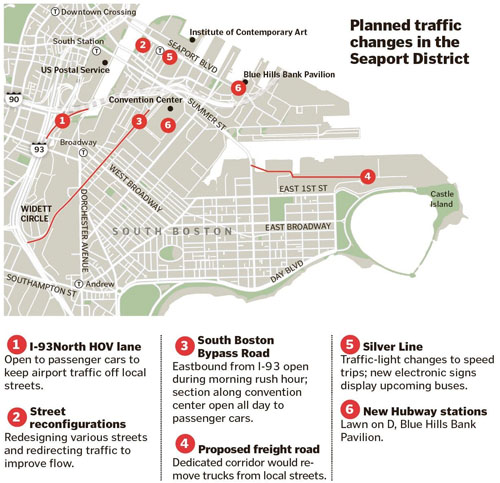 The biggest change begins Monday, when officials will open up a long stretch of the South Boston Bypass Road to all cars as part of a six-month pilot program. The street, created in 1993 for truck traffic from the Big Dig construction project, has been open only to commercial vehicles.

Cars will now be allowed to drive on the portion of the bypass near the convention center at any time, and on the eastbound section from Interstate 93 to Richards Street during the 6 a.m. to 10 a.m. rush hour.

Officials will also allow all passenger cars to travel on the barely-used High Occupancy Vehicle ramp on the northbound side of I-93 near downtown Boston, which brings traffic directly to the Ted Williams Tunnel, removing some airport-bound traffic from local streets.