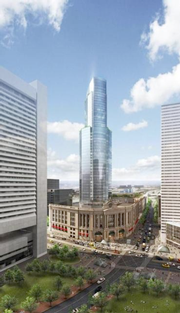 The proposed 51-story tower at South Station has attracted Gemdale Properties of China. Development rights for this project expire in April of 2017.

Houston-based Hines said the upper floors of the 51-story tower now include plans for 175 condominiums, with office space below. Thursday night, it won approval from the Boston Redevelopment Authority to bring a new majority investor — an arm of big Chinese builder Gemdale Properties — into the project.

“We are delighted to join in this venture with Hines to develop such an important and well-located project in a city which is exhibiting some of the strongest office and residential condominium market fundamentals in the US,” Gemdale said in a prepared statement.