Commuting to Boston
Boston Helipad Near the O’Neill Tunnel? 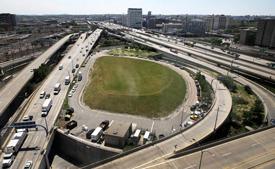 Commuting is a key to our city’s continued growth on the international stage, and the newest venue in that arena will be a helipad. Where the city, state and the FAA decide to put it is the next big question. Personally, I prefer the grassy plot south of Kneeland Street near an entrance to the O’Neill Tunnel.

A recent Boston Globe article notes “the state has already discussed a small patch of grass just to the south of the Tip O’Neill Tunnel, an unremarkable place so close to the surrounding highways that pilots could all but converse with motorists stuck in rush-hour traffic…But that’s just one possibility. The state Department of Transportation is also expected to look at a number of other locations close to GE’s future headquarters in Fort Point. And then there’s always the option of sticking a helipad on a barge in the water.”

You can read more on the Globe’s site, here.