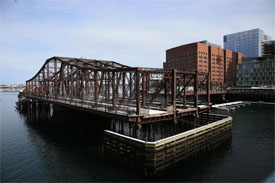 The influx of GE jobs may bring Seaport improvements along with them.  Traffic in and out the Seaport offers frustrations beyond which Waze can redirect.  Let’s hope we see much need infrastructure upgrades.

According to the Boston Globe, “Tucked in the agreement to bring General Electric Co.’s global headquarters to Boston is a commitment from the city to spend as much as $100 million to reopen the Old Northern Avenue Bridge, while the state will kick in $25 million to improve roads, pedestrian walkways, and bike lanes throughout the Seaport District…The money, city and state officials said Tuesday, is beyond what they publicly pledged to encourage the industrial conglomerate to relocate about 800 employees from its home office in Fairfield, Conn. The GE deal, announced last week, included up to $120 million in state subsidies for property and infrastructure expenses and as much as $25 million in tax breaks from the city.”

You can read more on the financial overtones of GE’s move to the Seaport on the Boston Globe’s website, here.