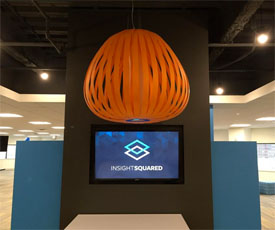 Have a peak at what groups are doing with their new office space.

The BBJ posted a photo gallery of InsightSquared’s new Boston HQ, and notes the following:

The new headquarters, which InsightSquared cemented with an office-warming party last week, is a far cry from where they started in 2010. Back then, they were working out of a tiny space at Bessemer Venture Partners.

“It feels great to be here,” said CEO Fred Shilmover at the company’s office-warming party last week. “It feels like our first grownup office.”

InsightSquared is backed by $27 million in venture funding and employs 170, up from less than half that amount in 2014.