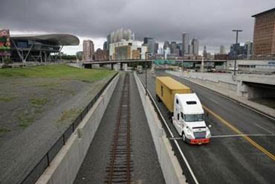 Can track 61 save the Seaport from its own success? To be clear, it could help and we could use it.

Originally a freight line that was part of the industrial rail yards along the South Boston Waterfront, Track 61 has been unused for many years while around it a new neighborhood of glass-walled offices, luxury condos, and hip restaurants has sprung up.

The roughly 1.5-mile spur [that] cuts across the Seaport District from the southwestern edge of South Boston…is coming back to life [to test] new Red Line subway cars that are being built for the Massachusetts Bay Transportation Authority in Springfield.

The work will include an electrified third rail along Track 61 to power the Red Line cars, a new shed, and other improvements.