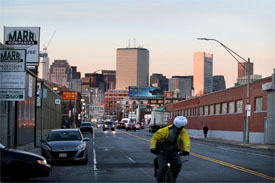 Dot Ave is on the move in the city with the BRA signaling a change in zoning.  According to public record Dot Ave has:

According to the Boston Globe, “the Boston Redevelopment Authority is circulating sketches of what a stretch of the street lined by low-rise warehouses and staging yards would look like as a corridor of retail and apartment buildings, some as tall as 300 feet. There would be parks laced throughout, with better sidewalks and 12 blocks of new streets added in back toward the South Bay Rail Yard…zoning plans are the clearest progress yet after months of community meetings to rezone the Dorchester Ave. corridor…The plan would radically remake a three-quarter-mile-long, light industrial area north of the Andrew MBTA station into a walkable, transit-accessible hub of new housing, with green space and pleasant storefronts.”

You can read more on the proposed Dorchester Avenue development on the Boston Globe.