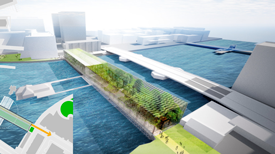 The Northern Avenue Bridge has arrived at the final 4. Next to follow are the RFP’s from the City of Boston.

The city of Boston and the Boston Society of Architects announced the winners of a competition Thursday that would reimagine the Northern Avenue Bridge, the now-closed dilapidated structure that serves as a link between downtown and the burgeoning Seaport District.

The four winning ideas — chosen by a jury assembled by the city and the BSA — range from a plan to place an elevated civic space in the middle of a revamped bridge to one that places a “greenhouse where botanical gardens flourish year round.”

You can read more about the final four Northern Ave. Bridge proposals on the BBJ.

Previous article
Curbed Lists ’10 Buildings That Tell the Story of Boston’
Next article
Dorchester Ave in the Crosshairs of Boston’s Next Development Boom
Tags: