Back Bay Tower
Former Hancock Tower Mortgage gets Paid Off 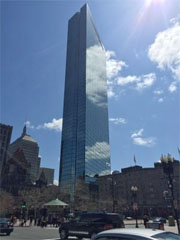 Refinance is a hot topic for homeowners and office tower owners.  Boston Properties is addressing all their debt that matures in the next two years.

Boston Properties has spent $667.4 million to retire the mortgage on 200 Clarendon in Boston, the 62-story Back Bay landmark previously known as the Hancock Tower…The loan had an outstanding principal balance of $640.5 million at a 5.68 percent fixed rate and was scheduled to mature in January 2017, according to a press release. Boston Properties paid $667.4 million to buy U.S. government securities that will generate cash flow to pay off the loan in October 2016, the company said. The mortgage and liens on the property have been extinguished, Boston Properties said…Boston Properties’ strategy is to pay off or refinance debt that matures in the next two years at above-market rates.

John Hancock to Return to Back Bay

Back Bay development Back Bay office Buildings Back Bay Tower