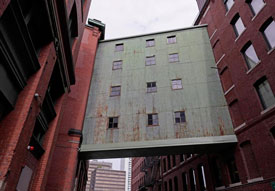 GE unveils a glimpse of our industrial past with renderings to the new pedestrian bridge at their new world headquarters in Boston’s Seaport. The new bridge will be used as four separate lounges and quiet working spaces for GE employees.

Consistent with its historical design, GE expects to keep a green wall on the east side of the bridge. But the bridge’s west side, facing downtown, would look quite different. The windowless facade, currently shielded by corrugated metal, would be replaced with banks of tall windows. The interior — oddly shaped at 40 feet long by 7 feet wide — is to be used as four separate lounges and quiet working spaces for GE employees.

The bridge was once an important link between buildings in the old New England Confectionery Co. complex. But it has long since outlived its original function. It now extends between one of two old brick buildings that GE will occupy and another former Necco building, currently owned by Synergy Investments. The Synergy-owned office building will remain walled off from the GE bridge.