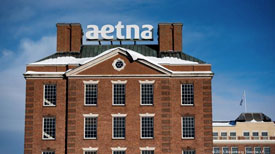 It appears the exodus from Connecticut continues as speculation swirls around Aetna’s search for a new home. Perhaps it is best summed up as a Yankees Red Sox battling in a pennant race and time will tell what city will be victorious.  Boston will continue to attract world class companies of all sizes and the talented individuals who will be employed by them.

“We are in negotiations with several states regarding a headquarters relocation, with the goal of broadening our access to innovation and the talent that will fill knowledge economy-type positions,” Aetna said in a statement on Wednesday.

The city of Boston in July 2015 had named Aetna a “top target” following proposed tax-law changes in Connecticut, according to emails obtained by the Boston Business Journal in a public-information request.