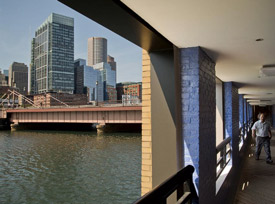 The missing piece of the puzzle has been solved at 253 Summer Street with a new food concept.

The 253 Summer St. project has received a $2.25 million building permit to “build out (a) new restaurant along basement area/new exterior storefront facing Harborwalk.” Leaf said early plans for the restaurant include adding windows to what’s now a painted concrete wall, with the restaurant’s entrance facing the Harborwalk. There are also tentative plans to have a patio dining area on what’s now pavement along Necco Court — a spot that will directly abut GE’s headquarters campus.