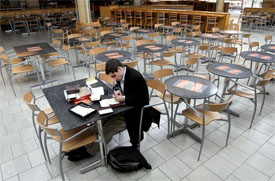 For 22 years the food court at the Pru has been a Back Bay mainstay, come June 30th it will be a memory.  Boston Properties despite their lack of comment have a clear vision for their customers and execute flawlessly.  Rest assured, lunch will be served again, just be patient while our city continues to change.

The food court at the Shops at the Prudential is scheduled to close at the end of June, and its replacement, a massive Eataly marketplace, won’t open for more than a year…Some applaud the decision to open an Eataly, which hopes to draw 5 million customers a year, in the space in September 2016. At least until the marketplace opens, the lunch-scene void is an opportunity for other businesses, said Ani Collum, a partner at the Norwell consultancy Retail Concepts…Collum said food trucks and other mobile vendors should set up near the Pru to cash in because time-strapped workers may not have a long enough break to eat at a restaurant. Nearby establishments would also be smart to offer to deliver to the office buildings, she said.

Back Bay Office Market is Evolving