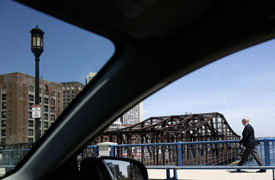 The Northern Ave. Bridge is scheduled to come down in March. The bridge site is now the gateway to the Seaport, which continues to grow with the recent announcement of GE’s election to move its HQ to the thriving Boston submarket.

The rusty, sad structure that links downtown to the Seaport is set to be removed in March. But the Northern Ave Bridge wasn’t always such a rickety construction; it became a grand throughway across the Fort Point Channel after it was built in 1908. It’s also one of the remaining few swing bridges in Boston, meaning that it pivots when traffic in the water below needs to pass by.

The steel bridge was closed to vehicles in 1997—and recently to pedestrians in December 2014—after the Coast Guard asserted it was hazardous to cross and in danger of collapsing. The bridge’s demolition seems unfortunate, since the aged platform boasts a distinctive history.