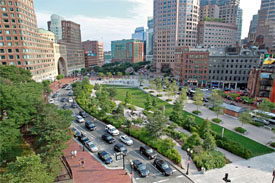 We have worked so hard to suppress the central artery I’m not too sure it makes sense to litter it with a monorail.

Minnesota-based JPods has proposed bringing their solar-powered gondola pods to Boston and Somerville, an idea that caught the attention of former city councilor Steve Murphy, who liked them for the Greenway.

JPods are among a category of vehicle called personal rapid transit, a network of small, solar-powered automated vehicles that operate on specially built guideways. They’ve been tested — in different forms — everywhere from New Zealand to Abu Dhabi and even installed in Heathrow Airport to ferry travelers from Terminal 5 to the long-term car park. The expansion of these projects always seems to end with the conclusion that they don’t move a high enough volume of people for the considerable cost. It’s just the type of problem Boston’s innovators could take on.