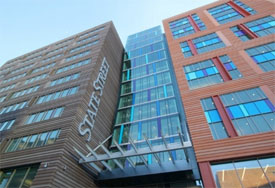 State Street has opened is new facility in the Seaport at Channel Center. For some this marks a trend towards more collaborative downtown workspaces.

“Mayor Walsh and State Street CEO Jay Hooley were among those celebrating the 222-year-old financial services giant’s jump from the Financial District to the emerging Seaport. Kristin says State Street’s presence validates the Seaport as a desirable corporate address. And the building’s open layout—which emphasizes collaborative space over individual cubicles—is a “game changer.” (It’s also easier to see who’s gossiping about you.) The company expects that at least 3,500 employees will move in by fall; it started moving in February. The build-to-suit was developed by Commonwealth Ventures and AREA Property Partners.”