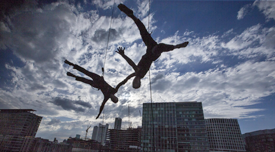 Joe Fallon’s 100 Northern Ave. in the Seaport is preparing for a launch party different then we have seen before: vertical dance. Boston’s Seaport is one of the country’s hottest submarkets with office tower trades in excess of $1,000 per square foot and the new world headquarters to GE.

According to the Boston Globe, “the vertical dance group Bandaloop rehearsed its creative moves from the 17th floor of the new building on 100 Northern Ave. on Tuesday…The pioneering vertical dance company is making a rare appearance in Boston to commemorate The Fallon Company’s latest development milestone: The 534,000-square-foot, 17-story commercial building. It’s the fifth building to be completed at the vibrant, mixed-use Fan Pier neighborhood and is set against the backdrop of Boston’s cityscape and Boston Harbor.”

You can read the full article on the Globe’s website.