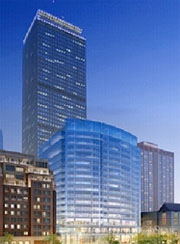 Retail is getting a makeover in Back Bay.  Boston Properties will making some major announcements as it pertains to their new building 888 Boylston Street and the neighboring retail spaces.

The Shops at the Prudential Center are about to get a major overhaul complements of Boston Properties…Executives there declined to name any of the incoming tenants just yet, but vowed to identify the retailer that has been secured for a nearly 9,000-square-foot space in the mall in the next few months.

The Pru’s food atrium is [also] said to be getting a serious makeover and Boston Properties reportedly will build a grand-scale new building for office space, luxury condos and retail nearby at 888 Boylston Street near Gucci’s current location. As reported, the first Primark store will bow in Boston later this year at Downtown Crossing as part of the multi-million dollar Millenium Tower and Burnham Building development project. Millenium Partners plans to build a 60-story glass tower near where the original Filene’s once stood.

Tesla to Open at 888 Boylston Street