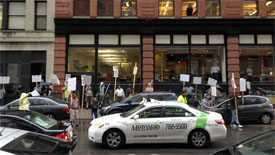 How do you prefer to traverse the city; Uber, Lift or a yellow taxi?  The taxis of the city are trying to level the field by launching their own app.

According to the BBJ, “the app, which can connect with Apple Pay or Google Wallet, has already launched in Philadelphia and New York City. More than 1,400 of the 1,600 licensed taxis in Philadelphia are already equipped with Verifone payment systems for credit card acceptance and are ready for Way2ride…there are currently 1,825 licensed cabs operating in the city of Boston…A Boston taxi industry group spokeswoman said it was too early to tell if the app would be a step in the right direction. Taxi union spokeswoman Donna Blythe-Shaw said she was more concerned with the fact that taxis are still forced to comply with more stringent and often-complex regulations than ride-hailing services such as Uber and Lyft.

You can read the full article on the Boston Business Journal’s website.

What 10M Driverless Cars by 2020 Means for Real Estate Development