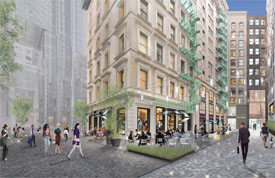 According to the Boston Globe, the BRA approved six projects in total, “the agency gave the go-ahead to some $515.6 million in development…One of the biggest projects is Congress Square, the renovation of an entire city block of buildings in the Financial District, between Congress and Water streets. Developer Related Beal plans to turn six office buildings into a boutique hotel, new housing, and office space…Also approved was Clippership Wharf, which would put 492 apartments and condos on 12 acres on the waterfront in East Boston. Developer Lend Lease plans to move forward on the long-stalled project and won approval to add housing units and subtract parking spaces from a plan approved in 2003.”

Congress Street Bridge will be Illuminated at Night