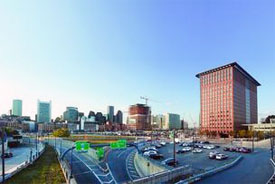 The Seaport, formerly known as the South Boston Waterfront has not only evolved, but arrived.  Interestingly it is not as clearly defined geographically as one might think.  One border is the Fort Point Channel and another is Boston Harbor.  Beyond that, it is up to some interpretation.

According to CoStar, the border continues to West 2nd Street and East 2nd Street.  The core of the Seaport in my opinion consists of: Summer Street, Congress Street and Seaport Boulevard and the various intersecting streets.  The Boston Design Center, Convention Center and Wormwood Street would also be included.

The Boston Business Journal quantifies the growth, noting, the Seaport District “already has a population bigger than Beacon Hill’s, and more radical change is on the short-term horizon. Some of the region’s most experienced developers are pushing forward projects that within three years should create more than 2,500 housing units. City planners see another doubling in housing stock, to 10,000 units, by 2030.

Seaplane from Boston Waterfront to NYC