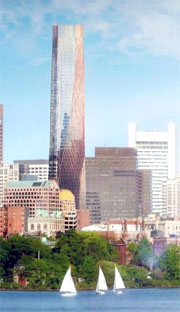 The shuttered garage that falls between Devonshire and Federal Street in the core of Boston’s Financial District shines brightly as an opportunity for eight suitors to make their mark on the Boston Skyline.  Tenants in recent quarters have flocked Downtown to take advantage of value rents and infrastructure driving office vacancy down to 10 percent.

The Boston Globe details the eight developers “have filed proposals for a skyscraper, several of which would be nearly as tall as the city’s largest, the Hancock Tower, on the site of a city-owned parking garage that is now closed. The competitors include a who’s who of local and national developers, a measure of how strong Boston’s real estate market has become…If approved, the Winthrop Square project would add another tower to the fast-changing Boston skyline. Already, five towers over 600 feet are proposed or are being built while other large complexes are under development downtown.”

You can read the full article on the Globe website

Boston Skyline is Slated for Change

Boston is Contemporizing Outward, not Upward