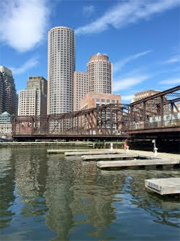 The Northern Avenue bridge built in 1908 is recommended to get another lease on life.  The bridge is one of the last remaining swing bridges in New England and is an engineering marvel to watch when it’s in motion.

The bridge was not only designed for pedestrians and cars, but also the Union Freight Railroad.

A study on the Seaport, referenced in Banker&Tradesman, cites the following:

The overall volume of commutes into the Seaport will increase 63 percent by 2035…The study committee’s consensus: restoring the three-lane bridge, with one lane dedicated for motor vehicles. Pedestrian and bicycle access also would be preserved.

“There was some concern in the pedestrian and bicycling community about opening it up to traffic,” said Rick Dimino, CEO of Boston-based planning organization A Better City Inc. “But at the end of the day, there was pretty substantial support that the bridge needs to be opened up to traffic again.”