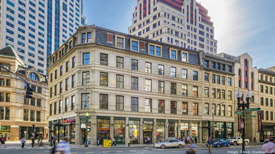 Trades continue in Boston’s Class B sector with the sale of 99 Chauncy Street and 101 Summer Street to TIAA from Synergy Investments for $75 million.

A recent article on the BBJ’s website notes, “Synergy sold the historic assets for a combined $75 million to a unit of TIAA, a New York-based teachers’ union pension fund with $889 billion in assets under management, according to Suffolk County deeds. Synergy’s ownership partner in the properties was Indepencia PE, a Chile-based investment advisor. The $75 million sale price is four times the combined $18.7 million Synergy invested in 2010 and 2011 to acquire the properties.”

Additional details about the class B office building sales are available on the Boston Business Journal, here.