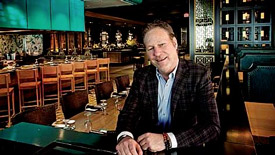 Some street corners looking to be changing in Boston and with the city wide reduced speed limit we can now appreciate some of the new destinations. Ed Kane is looking to create a new destination at the corner of Boylston and Tremont Street to offer French cuisine.

According to an agenda for a meeting next week of the Downtown Boston Residents’ Association, entrepreneur Ed Kane wants to open a full-service French restaurant and cafe in the space, which is just off the Boston Common. Kane’s company, Big Night Entertainment Group, owns a group of restaurants and nightclubs in Boston including Red Lantern, Empire and Gem.

Plan Submitted for Site over Mass. Pike in Back Bay