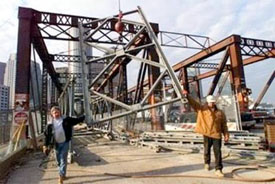 The Northern Ave. Bridge is closer to becoming a memory, once joining the Financial District to the Seaport.  When it was built it would have been hard to imagine that it would come to connect two vibrant, non-industrial areas of our waterfront. Let’s hope the city moves forward with a replacement to assist in the congestion of success that has occurred.

In a new permit application filed with the Army Corps of Engineers, the agency that oversees the waterway, the city proposes dismantling the bridge by disconnecting its three spans and transporting the pieces via barge to a city-owned storage yard in East Boston.

Full dismantling of the structure — which is listed on the National Register of Historic Places and beloved by preservationists — could take up to three months, said city engineer Para M. Jayasinghe. It is expected to cost $15 million.

While the bridge is being taken down, the channel would have to be closed to accommodate the work.

Northern Avenue Bridge will be Restored for Motor Vehicle Traffic