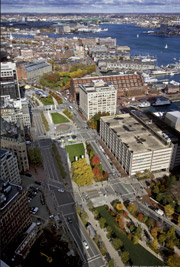 Growing up, the Central Artery that hosted Interstate 93 was anything but a place to hang out; today it is a vibrant park hosting food trucks, Wifi and people on 15 acres stringing our city together.

According to the Boston Business Journal, “Lawn On D in South Boston, owned and operated by the Massachusetts Convention Center Authority…is on track to reach more than $1.2 million in net revenue for 2016. That represents 300 percent growth over revenue of $400,000 generated the year prior…Since 2009, when the Greenway was first opened and some people in Boston were referring to the open space as the “Emptyway,” the Greenway has tracked growth by a number of metrics: food trucks and their patrons; third-party events along the Greenway and their attendees; wireless Internet users; and carousel riders, to name a few.”

More information on the Greenway’s growth is available on the BBJ, here.