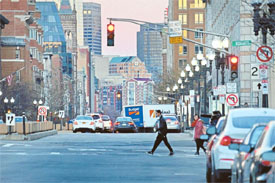 Boylston Street in Boston’s Back Bay is expensive, but not too expensive. In the 2nd quarter of this year my company signed an expansion and renewal at 745 Boylston Street after conducting a thorough search for alternate options.  We chose to stay and expand based on our attraction to the area’s amenities, proximity to highways and our customers.

Office rents on Boylston Street, however, do rank among the priciest in the country, according to the Boston Herald.

The Back Bay’s main thoroughfare has an average rent of $67.44 per square foot, thanks to its marquis office properties and tenant list dominated by hedge funds, and private equity and law firms, according to a report by Jones Lang LaSalle, a Chicago commercial real estate company…Those factors have allowed Boylston Street landlords to raise rents 1.3 times faster than on other cities’­ most expensive streets since 2013, the JLL report states. And Boston Properties’ 888 Boylston St., a 17-story office tower set for completion next summer, already has signed record-high leases.

Commercial Office Markets to Watch in 2018

Did you sign your Boston Office Lease during the Great Recession?

Penthouse Office Space in Back Bay at 116 Huntington Ave.