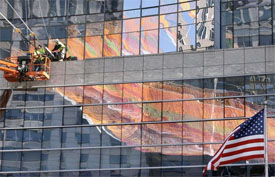 The work of Janet Echelman, a Brookline Artist, is now on display in the Rose Kennedy Greenway through October.

According to ktul.com, “the 600-foot work by artist Janet Echelman [was installed] using a battery of cranes and scissor lifts…The orange and magenta netting made of polyethylene rope weighs a ton, and is designed to respond fluidly to wind and weather. It will remain suspended in the Rose Kennedy Greenway between two high-rise buildings across the Greenway.”

You can read more on the sculpture, here.